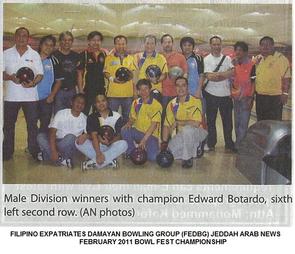 Edward Botardo (Mens Div.) and Alona Antinero (Womens Div.) February 2011 FEDBG FEB, BOWLFEST champions,
Edward Botardo sealed the men’s crown with his two-game total of 469 while Alona Antinero potted women’s title with her 410 contention concluding the February Bowlfest 2011 of the Filipino Expatriate Damayan Bowling Group at the Bowling City here.
Topped by his tournament hi-game record of 277 scratch on class D, Botardo with 2251 entered finalist level second to Rolly Vistal who top-qualified with 2,312 including his 257 hi-game scratch. Botardo and Vistal were joined by Alex Mallari, Sol Cuenca, Jowet Carreon and Edris Mangoda on finalist status with respective accumulations of 2,245, 2,214, 2,195 and 2,164. Fred Cuenca became the last D finalist via surviving the Ver Jasa, Rudy Carillo, Med Ramos and Mac Galang on their shootout.
Bobby Baraquel was sole direct finalist topping Class A with 2,373 nine-game scratch including a couple of 269. Jun Estefano with 286 hi-game, top-qualified B with 2,330. Johnny Macalinta (2,319), Melvin Lising (2,313 and Marcelo Manalo (2,311) joined Estefano in final phase. Jett Santos recorded 2,258 to be No. 1 qualifier on C followed by Abdulfatta Mogawan (2,250) and Jerry Carredo with 2,208 including his 263 hi-game. Zaldy Bacero, Ruben Grino and Rudy Jamon entered the finals by surviving the shootout. Bacero defeated Class A 279 hi-gamer Ric Reformado. Gri?o outbowled Ernie Geslani and Ruel Santoc. Jamon won over Marlon Heredia, Arnold Banayat and Jay Bengco.
With 18 bowlers in the two-game finals, Botardo, Baraquel, Carredo and Vistal were seen early dominance for the major prizes with their initial salvos of 243, 223, 216 and 215 respectively. On the striking distance were Manalo (210), Cuenca (207) and Estefano (200). Estefano then with string of strikes placed Botardo under fire till the 9th frame of the ultimate game. But with Estefano’s horrible miss on the last frame Botardo jubilated in celebration of his first major FEDBG championship on 226 endgame survival.
Estefano salvaged second place with 451 including the 251 last game. Carredo and Manalo toppled third and fourth places with 450 and 435 in that order.
Antinero top-qualified women’s division with 2,094 and was the first to enter the express lane status. But as the qualifying progressed, Ester Santoc, Sally Sa?osa, Malou Gime, Eloisa Fernandez and Bing Baraquel joined Antinero on same level with respective scores of 2,062, 2,053, 2,048, 2,039 and 2,008.
On the four-game semifinals Christine Esperancilla topped the race with 835, followed by Evelyn Santoc (774), Puri Parena (756) and Alma Baylon (743) to contend with four early finalists via express lane. On the 8-bowlers finals formatted for two games, Antinero determination for another title, gapping 35 pins at 222 over nearest pursuer Puri Parena who paced with 187. Evelyn Santoc and Baylon were on the striking distance with 184 and 182.
But the ultimate game changed the tempo of the match as Fernandez and Esperancilla showed rigid struggles and Antinero was seen safeguarding her lead. When the wave of contention settled down the final results registered Antinero as the FEDBG February Bowlfest 2011 champion followed by Fernandez (388), Esperancilla (387) and Baylon (374). Consolation prize winners were Parena, Evelyn, Baraquel, Gime, Ester and Sa?osa. Hi-game winner was May Lourdes with 258. Sharing the 250 and up record were Lourdes and Gime for scoring 258 and 257 scratch for brand new hi-performance bowling ball. __ by: PIP PLANAS JEDDAH 2011
___________________________________________________________________________________________________________________ 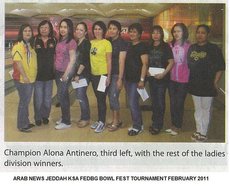 JEDDAH: Joel Nidoy unleashed two great games to dethrone Paolo Allego in the men’s division, while Alona Antinero struggled in the ultimate set to dominate the ladies’ group on the conclusion of the hotly-contested Filipino Expatriate Damayan Bowling Group quest for Champions of May 2011 at the Bowling City here.
Reaching finals via topping class A with 4-game scratch series of 821 and eliminating Emil Payongayong on their 2-game shootout, Nidoy initialed the championship with 238 to be ahead by 26 pins on the closest competitor Marlon Heredia who opened up with 212. Allego and Faisal Relativo tried to be in striking distance on 203 and 184 respective contention.
Payongayong won over class A contestants Oca Bernabe, Ed Sardina and Bobby Baraquel. Heredia reached finals by surviving Serge Rivera, Nards Hassan and Edward Botardo on one-game showdown and defeating class C top qualifier Jett Santos on 2-game settlement of 389-377.
Allego made it last lap by discounting Alex Mallari, Jowet Carreon and Sol Cuenca then out-bowling class D top qualifier Rolly Vistal on lopsided match of 404-328. Relativo survived the challenges of Johnny Macalintal (447-384) who emerged best among class B Cesar Monares, Melvin Lising, Jimmy Aragones, Jun Estefano and Ruel Santoc.
With only defending champion Allego, who is disadvantaged by 35 pins, showing vehement pursuit, Nidoy just kept trading marks to safeguard his lead so that when the crucial last frame was reached the title defender could merely inch to second place on 2-game total of 430 including his 227 endgame chase. Nidoy took home the crown with 453 two-game scratch series. Heredia ranked third with 399 while Relativo embraced 4th place with 376.
Qualified No. 1 with 824 on CD to be in the finals together with Cheryl Tibay who bowled best with 799 on AB on the 4-game elimination, Antinero started with a disgruntling 156 to initially third behind Sally Sa?osa (205) and Ester Santoc (178). Tibay hardly found her track for a 146 opener. Sa?osa and Santoc turned out finalist when they respectively beat Matet Cavite (195-182) and Carmen Lim (195-186) in one-game showdown.
Lady Bowler of 2010 and February 2011 Bowlfest titlist, Antinero was not deterred by her anemic start but instead tried to overcome her lane problem, focused well and precisely find her track. The result was a startling jetting up to virtually clinch the May 2011 title when her 242 chase totaled her of 398 to overtake Sa?osa who could only sustain 184 summing up 389 for second place. Santoc relegated to third place with 377 including her 199 sustenance and Tibay dwelled 4th place with 342.
Also contending on AB group are Bing Baraquel, defending Pinky Acato, Malou Nidoy, Fatima Jintarat, Carmen Bernardo, Alma Baylon and Malou Gime. Classes CD was also contested by Jannah Felismenia, Vangie Lim, Eloisa Fernandez, Farida de Guzman, Jessica Fuentes and Evelyn Santoc. __ BY: PIP R. PLANAS, JEDDAH
___________________________________________________________________________________________________________________ 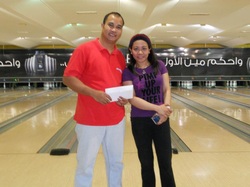 With his superlative first five games and relaxing last set Zaldy Bacero snapped the men’s division title on total 6-game scratch series of 1371, while poor starter Mariz Resano climbed game by game to emerge champion in the women’s section at the Filipino Expatriate Damayan Bowling Group Anniversary Bowlfest 2011 at the Bowling City here.
Topping Group A with 3,768 15-game scratch series in the qualifying round, Bacero survived the Ed Sardina-638 dominated 3-game semifinals at third with 629 behind Obie Ycasas (636) and joined by Roger Daquioag (621) and Max Salang (608).
Bacero then excellently started final sojourn with superb 265 and his nearest rival was Class C Rolly Vistal 235. A 241 follow-up made Bacero way ahead with 506 into which Class B Jett Santos closely challenging with 475 on a 277 scratch chase. Pursuers inched the gap when Bacero stalled 203. Ernie Geslani and Edward Botardo now appeared on major prize column behind second-place keeper Santos.
Sensing an explosive rally could endanger his post, Bacero resumed scoring spree at 263 and 232 to be 108 pins away (1,204-1,096) from the closest pursuer Santos. Botardo was trying to safeguard third spot with 1095 while Paolo Allego and Sardi?a enabled to tail with 2,086 and 1,076 on 244 and 238 pursuits.
But with an almost lock victory Bacero bowled no pressure on the last game to finally take home FEDBG-ABF men’s title with SR10,000 cash prize on his 6-game scratch series of 1,371. Santos kept second place at 1,290 for SR5,000. Surprisingly Sardina moved to third place with 1,273 edging Botardo with 1,269 for their SR2,500 and SR1,500 respective prizes. Completing the top 8 were Allego (1251), Marlon Heredia (1246), Fred Cuenca (1,216) and Nards Hassan (1,208).
In the women’s division, from the bottom on 140 opener, Resano steadily moved up aspiring to challenge early top 4 May Lourdes (210), Fatima Jintarat (188), mom Sally Sa?osa (185) and Carmen Lim (184). Starting her pursuit with 196 she rose from 9th to 6th place with Lourdes keeping the front, while Fedelyn Bustinera, Jintarat and Minda Guevarra closely threatening. A 222 continuous rise placed Resano at 4th with 558. Mom Sally grabbed top spot on 238 explosion seizing leadership at 592. Guevarra and Lourdes were tailing Sally with 588 and 576. Half way of the championship, Resano stalled herself at 4th (744) trying to keep distance with new leader Guevarra who took the banner from Sally (772) with her 788. Lourdes kept third post with 759. With a 193 penultimate game Mariz pulled down mom Sally and Lourdes to third (935) and fourth (932) as the youthful campaigner gave a 937 challenge to Guevarra’s 953.
Devastating finish then decided the ladies title as Resano unleashed 242 for ladies crown on 1,179 total and SR3,000 championship prize. Mom Sally, who also displayed reserved power at 219, took second place (SR2,000) with 1,154. Strong contender Guevarra with 182 last-game protection salvaged third position (SR1,000) with 1,135 and to the astonishment of Lourdes and other aspirants Lim astoundingly snatched 4th place (SR600) with 1,124 on her 241 last-game pursuit. Also lady finalists were Christine Esperancilla and Alona Antinero. – BY: PIP R. PLANAS, JEDDAH_ 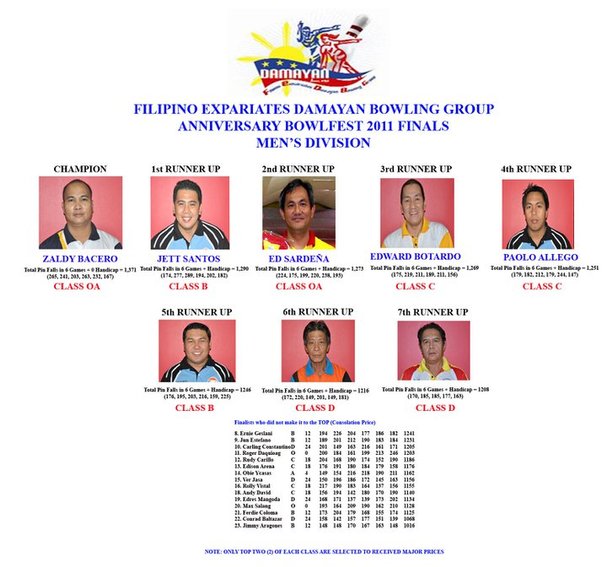 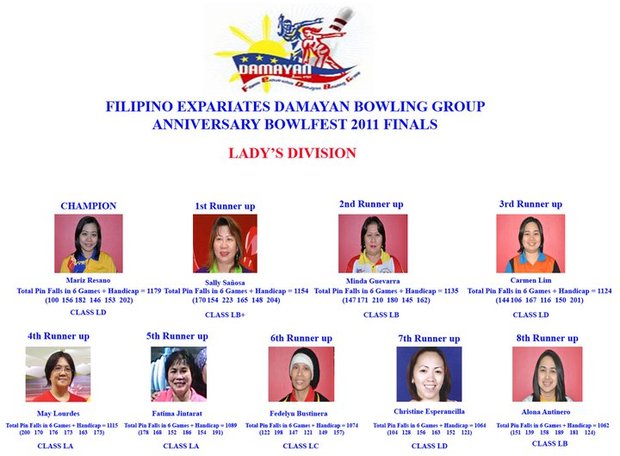 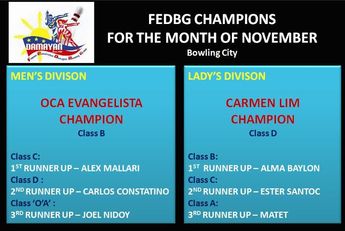 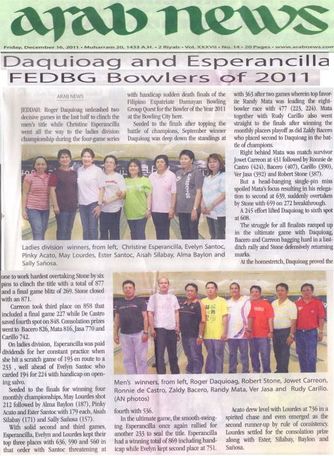 ZALDY BACERO GOT A 300 pin falls a perfect score . 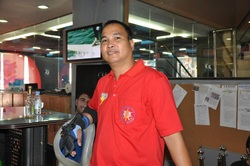 (FROM HOME PAGE) Bacero actually probed the condition with a 200 on game 1 then scorched lanes 15 & 16 with an almost perfect 280 if not for a break-9-spare on the second frame.
Moving to lanes 11 & 12, Bacero tested his track with notable perfect pockets on his first ball on lane 12 and second track finder shot on lane 11 into the third game. Those two probing throws seemed defaulted his path giving Bacero fixed line to roll on with ten remaining frames till he reached the last block that made all fun gamers to momentarily pause to witness another history on FEDBG-sanctioned games.
Picking up his brand new DV8 Hell Raiser, 15#-ball, bought and drilled in JBS-Pip's Pro Shop just recently, Bacero, in full view of another perfect-game achiever Randy Mata, stepped on the approach and with his normal stance, rolled precisely on his spot and track for a perfect shot that recorded third perfect game to his name to the uproar of the  fellow fun gamers and viewing crowd. Bacero bowled his first perfect game on lanes 13 & 14 then on lanes 3 & 4 and
now on lanes 11 & 12 all in Bowling City on oil condition programmed by lane oil pattern specialist Ed Sardina.
Bacero totaled 943 for an average of 235 in four games. This another perfect game of Bacero shall prize him of Brand New High Performance bowlng ball courtesy of FEDBG-sanctioned February Bowlfest 2012, wherein the defending male-bowler champion is Edward Botardo and Alona Antinero for the ladies.
So be inspired by this performace of our KaDamay Zaldy, Join Up in our usual 2PM low-cost fungame/qualifying today here at BCT. We still have until March 8, 2012 to try into the cut off of qualifiers.
FEDBG FEBRUARY BOWLFEST 2012 shall conclude on March 9 which shadow bowl is at 8AM. Please take note of this date.
MARCH 9, 2012 - CHAMPIONSHIP OF FEBRUARY BOWLFEST 2012. Shadow bowl is at 8AM, FRIDAY.
For more details please contact me at 0508673243. FMBL11 bowlers please settle 2012 Damayan dues before you play on the 17th week of the league this Friday.
Copyright © 2011 edward botardo Interactive All rights reserved
BOWLING ACTIVITY OF FILIPINO IN JEDDAH KSA, BOWLING TIPS & VIDEO , BOWLING INTERACTIVE SPORTS.