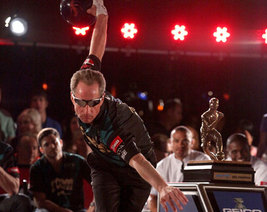 Weber, who came into the stepladder finals as the No. 4 qualifier, threw clutch shots in three matches to win, but none was more critical than his strike on his final ball in the title match. Needing at least a nine-count spare and strike to win, Weber threw a perfect pocket shot on his first ball, but left a 10 pin. After converting the spare, he threw an identical shot that carried for a strike.

In winning the title, Weber broke a tie with his late father, Professional Bowlers Association legend Dick Weber, and his father’s close friend, the late Don Carter, who each won the forerunner to the U.S. Open – the BPAA All Star – four times.

“Dad, I know you were watching,” Weber said as he looked up toward heaven after the win. “I know you’re proud, and I’m sorry I broke your record.

“This is my greatest title ever,” Weber said. “To win five U.S. Opens and pass Dick Weber and Don Carter says a lot, but I’ll never say I’m better than them. They paved the way for us to be here. It was an honor and a privilege to join them when I won my fourth U.S. Open, and it’s even more of an honor to be the first one to win five.

“This is the tournament I look forward to ever year,” he added. “I live for the U.S. Open because I know, no matter what, I have a chance to win.”

At age 49 years, 189 days, Weber became the oldest player ever to win the U.S. Open, breaking the record set by 46-year-old Norm Duke last year at Carolier. And he moved into second place on the PBA’s all-time major title-winners list with his ninth title, behind only Earl Anthony’s 10.

“That’s probably the calmest I’ve ever been needing to throw a shot to win,” he added. “Not to toot my own horn, but I think I’m prouder of myself than anyone else. I’ve always wanted to be the one to throw a strike to win.”

In advancing to the title match, Weber threw critical shots in two preliminary matches, coming from behind to defeat Ryan Shafer of Horseheads, N.Y., 223-191, in the opening match and Australia’s Jason Belmonte, 225-213, in the semifinal contest.

“I threw strikes in the seventh, eighth and ninth in all three games and put pressure on those guys,” Weber said. “The way those guys performed was excellent. My hat’s off to them. They bowled amazing.”

The PBA Tour’s next televised event will be the finals of GEICO Shark Open which will air next Sunday at 3 p.m. ET on ESPN. Finalists will be top qualifier Chris Barnes, Double Oak, Texas; Jason Belmonte, Australia; Sean Rash, Montgomery, Ill., and Mike Koivuniemi, Hartland, Mich.