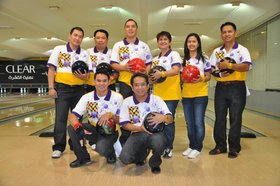 JEDDAH; Ric Reformado powered Lance & 3rdy to win over Micah’s Pride while Eva Garcia maximized her handicap to inspire Fire Fox in dominating the Pin Slashers on week two of the Friday Morning Bowling League 12th conference organized and administered by the Filipino Expatriate Damayan Bowling Group at the Bowling City here.
With his quick pro-like tracking Reformado readily seared lanes 9 & 10 with 247 and with the balance supports from Elo Manalo, Edward Botardo, Med Ramos, Ver Jasa and team manager Evelyn Santoc, Lance & 3rdy shutout Micah’s at  1243-1109 on the opening salvo. Keeping teammates buoyant, Reformado followed up with 204, but counterpart Oca Bernabe regained honor by returning 229 to have Micah’s Pride level the card with  1154-1138 on fair efforts of Melvin Lising, Ruel Santoc, Jack Jarin, Ronnie de Castro and TC Ester Santoc. An action-pack battleground was then seen on the last lap with Lising and Ruel notably mark-trading with Reformado and Manalo. But with Reformado capping with 246 and Manalo adding 221, Lance & 3rdy emerged victorious when Micah’s Lising and Ruel could only combine 413 to last the card at 16-4 ( 3630-3417).

Lance & 3rdy garnered their first team of the week honor on this superlative aggregate and earned twin reputation when team captain Reformado turned out Bowler the week with his hi-series record setter of 697 from fantastic games of 247, 204 and 246.

Unheard for quite sometimes Eva Garcia broke into the limelight when she guided Fire Fox in defeating defending champion Pin Slasher with her lady Bowler of the Week honor-winning total of 664. Garcia led teammates with her personally developed kegling talents of 222, 219 and 223. Such unchallenged output prompted TC Obie Ycasas (512), Archie ALcantara (529), Vic Bantay (568), Serge Rivera (537) and novice Melo Amano (578) to respond well and cleverly face the team-to-beat. Such positive reactions resulted in advantageous 11-9 on final aggregates of  3388-3200. Aileen Miralbuna shielded Pin Slasher best at 626. 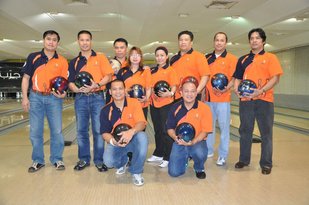 JEDDAH. Shawly Bowlers posted the highest total pinfalls of 3623 to be the team of the week, while Lance & 3rdy and Fed Extreme pursed 30 points each to be on the top of the overall team standings during the opening day of the Filipino Expatriate Damayan Bowling Group Friday Morning Bowling League 12th Conference at the Bowling City here.

Marginally losing game 1 at 1165-1059, Shawly Bowlers bowled back profusely to overwrite their disadvantage by 1337-1151 game-2 repulsion. This repugnance was caused by the all 200 and above scores of team captain Arnel Bautista, Edison Arena, Andy David, Joel Quiboy and Sally Sañosa with Max Salang contributing 190 on the 1201-1007 scratch rocking of Ding dela Rosa-guided D’ Mountaineers. Dela Rosa once again enlivened teammates with a 228 which Robert Stone, Manny Tibay, Edris Mangoda, Jun de Dios and Malou Nidoy greatly responded, but with Bautista counter-leading Shawly with 240 and Sañosa pairing a 234, D’ Mountaineers could only win last game at 1238-1227 to give away the overall to the earlier. Shawly Bowlers won the match and emerged as the first team of the week at 3623-3554 on 12-8 point settlement. Bautista and Sañosa garnered the Bowlers of the week honors on respective handicapped series of 693 and 605. Bautista had games of 199, 254 and 240 while Sañosa marked 168, 203 and 232.

With team captain Ric Reformado backed in form and Edward Botardo and Med Ramos cushioning superbly, Lance & 3rdy figured to be one of the title contenders hinted by an 18-2 victory over the Royal Strikers signed at 3600-3345. Lance & 3rdy swept the handicap sets at 1210-1083, 1127-1105 and 1263-1157 with Reformado inspiring teammates with 676 on his simple bowling style that posted sterling games of 244, 190 and 240. The match could have been shutout but Royal Strikers skipper Jun Estefano (196) and Joey Calapatia (212) saved a 965-939 game-2 scratch set. Nevetheless such deterrence inflicted less harm as team manager Evelyn Santoc, Shirley Sagmit and Rene Punzalan were all on above average performances that made Lance & 3rdy on top with 30 points on initial overall rankings.